District 64 announced at the Board of Education meeting on November 14, 2016 that it was naming the Learning Resource Center at Field School in honor of alumna Hillary Rodham Clinton in recognition of her historic candidacy for the office of President of the United States and exemplary public service that serve as an inspiration for our students today and tomorrow.

A graduate of District 64, Secretary Clinton attended Field School from Kindergarten through grade 6 and then attended the former Emerson Junior High for grades 7 and 8.

"Entering as a 4-year-old kindergartner in 1952, Secretary Clinton during her nine years in District 64 benefited from a well-rounded educational experience, which focused not only on academics, but the arts, extra-curricular activities, and community service opportunities," Superintendent Laurie Heinz told the Board.

"Leaving us as an eighth grader in 1961, we believe the rich and rigorous education she received in District 64 inspired her to discover her strengths, become a life-long learner, strive for personal excellence, and demonstrate caring as a member of our global society. These are the same goals we have for our students today," she noted.

"We believe that Secretary Clinton’s years in District 64 created an immutable foundation for her to experience success as a student in Maine Township High School District 207, and which later propelled her to a legal career and ultimately her service as First Lady, U.S. Senator and U.S. Secretary of State," Dr. Heinz said.

"We are proud that a child of District 64 and this community answered the call to public service by seeking our nation’s highest office. We know that her historic candidacy will serve as an example to all our students today and tomorrow of the boundless opportunities offered to them as graduates of America’s public schools," she added.

Ernie Ricketts and Betsy Ebeling, classmates of Secretary Clinton, were special guests at the Board meeting for the announcement. Sharing stories about their school days together at Field, they talked about how appropriate the school library was to name in Mrs. Clinton's honor as a symbol of her deep love of learning, which they said remains at the core of her and former President Bill Clinton's lives to this day.

Mrs. Clinton as First Lady visited Field School on October 27, 1997. Several specially inscribed 6th grade student photos of her are on display at Field from that visit along a Memory Wall.  Read more about Alumna Hillary Clinton here 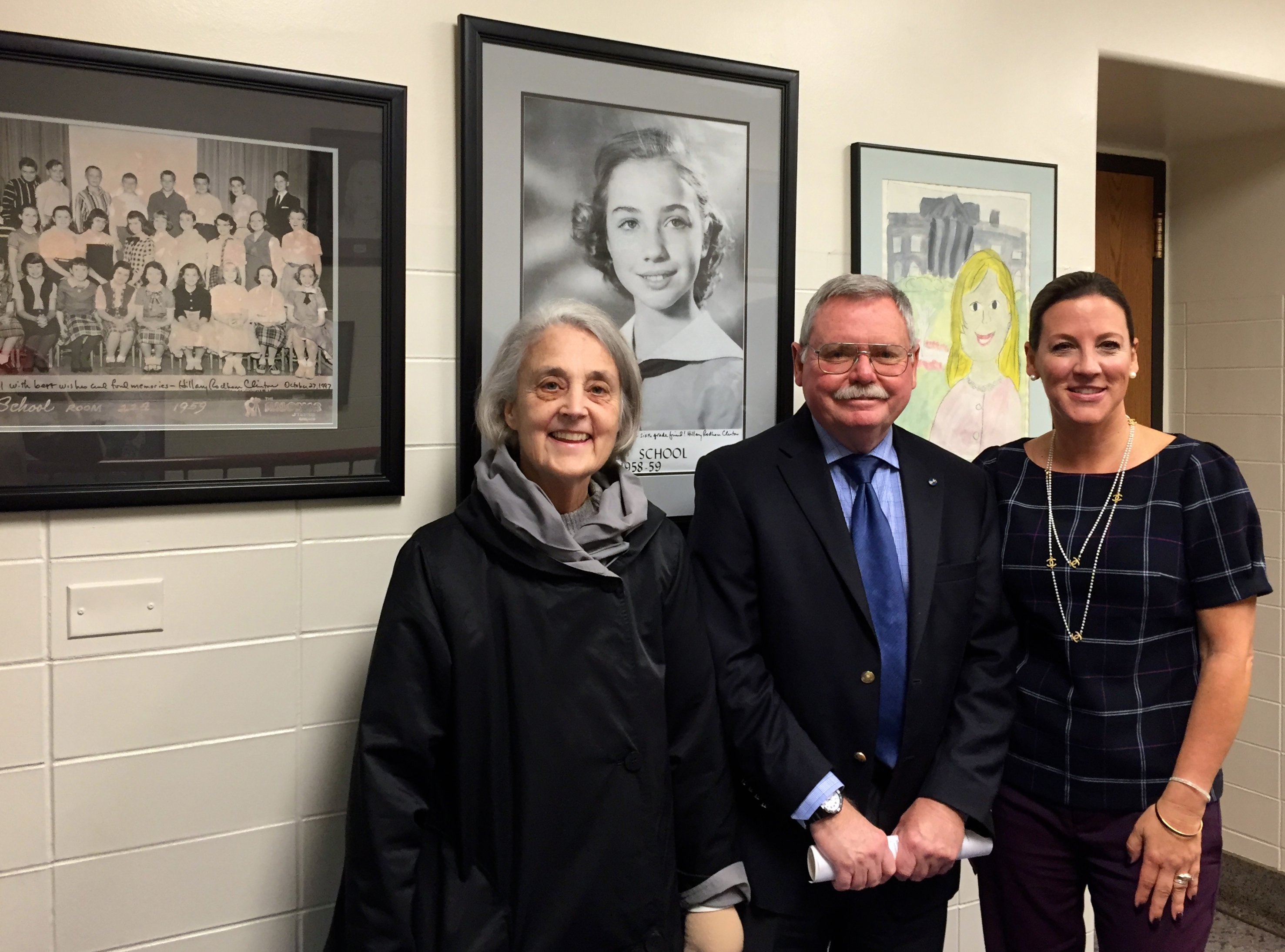 Field school graduates Betsy Ebeling and Ernie Ricketts review the Memory Wall with District 64 Superintendent Laurie Heinz at the announcement of the naming of the Learning Resource Center in honor of their classmate, Hillary Rodham Clinton on November 14, 2016. Both are pictured in the 1958-59 6th grade class photo at the left.

District 64 to move into in-person learning